POPLAR GROVE — They won voters’ confidence in April, and now they’re planning to spur residential growth in this community of 5,000 people that was on the upswing before the Great Recession started in late 2007.

They have amped up the village’s social media presence, rezoned residential property for commercial purposes along Illinois 76, set aside about $15,000 for a new park in the West Grove subdivision and aggressively started remarketing the community as “A Great Place to Call Home.”

They also plan to install new welcome signs, and they’re devoting themselves to speaking highly of their village.

“It’s just getting out there, walking that path and knocking on doors,” said Ramdass, who is handling much of the marketing. “Now, it’s just a matter of communicating with the other communities. I look at small steps as being a step.”

Poplar Grove was moving beyond its farming village reputation and catching the attention of homebuilders before the housing bubble burst. Several proposed subdivisions never got built. Existing developments have hundreds of lots available. There also are undeveloped lots.

Poplar Grove’s sewer and water system is capable of supporting 15,000 customers. Yet it only has 1,400.

“We took the philosophy of ‘if we build it, they will come,’” Costanza said. “They were. Then it stopped. So now what do we do? … We still have the same infrastructure to maintain. We don’t have the people and the revenue to sustain that.”

Ramdass and other village officials attended the June 17 Neighbors’ Fest at Lions Park, talking to anyone they could about their village.

The village had marketed the event with fliers and media releases to bring in residents from outside Poplar Grove. Families visiting Lions Park for baseball games lingered to enjoy the festival’s food, vendors, and games for children.

“It’s an all-in-one great community,” said Caitlin Stender, who moved to Poplar Grove from Rockford years ago. “It’s quaint. It’s small. But everyone here is friendly.”

“We’ll be looking for residents to sit on those committees,” Miller said.

Pamela Lopez-Fettes is the new executive director of Growth Dimensions, a public-private organization trying to ignite economic development throughout the region. She said trustees could help draw more people to Poplar Grove through enterprise zones that offers tax breaks to developers. They also could build on the village’s reputation for affordable housing and being home to the Poplar Grove Airport.

“They have a lot to offer,” Lopez-Fettes said.

“We are that great place to live,” she said. “It’s comfortable enough to still be a small town and yet close enough to shop in Belvidere and to shop in Rockford and Machesney.

“You may not work here. But pretty soon we hope you’ll live here,” Dykstra said. 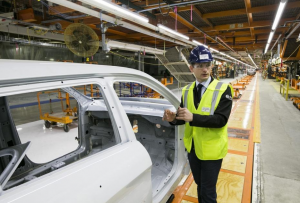